• 6 Jan: Día de los Tres Reyes Magos, or short, Día de los Reyes (‘Three Kings’ Day’ / ‘Three Magi’s Day’ / ‘Three Wise Men’s Day’ / ‘Epiphany’) – Observance/nationwide. A feast day commemorating the visit of Jesus Christ by the Three Kings (Melchior, Caspar, and Balthazar) on the 12-day after his birth, bringing him gifts of gold, frankincense and myrrh. Although, officially, the end of the Christmas season in Mexico – starting with celebrations related the patroness of Mexico on Día de Nuestra Señora de Guadalupe (‘Feast of Our Lady of Guadalupe’) (12 Dec) – the season is not really over until Día de la Candelaria (‘Candlemas Day’) (2 Feb).

The day is also a joy for all Mexican children as they traditionally receive gifts at Epiphany rather than at Christmas. During the days preceding the Three Kings, children write letters to them requesting their presents. The night before the Three Kings, the figures of the Magi are placed in the nacimiento (‘nativity scene’). 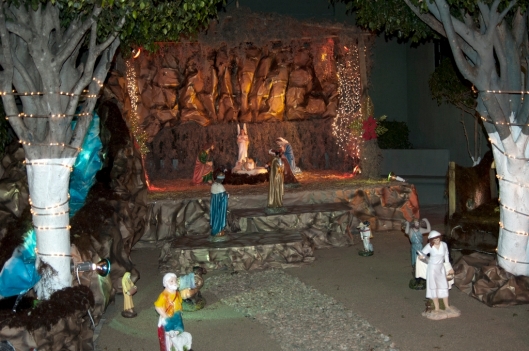 In some parts of Mexico, like in Oaxaca, children traditionally leave their letters in their shoes by the doorway – or another strategic place they may consider auspicious as a place of visit – stuffed with a bit of hay to feed the animals (camel) on which the Kings arrive. When children wake up the following morning, their gifts appear in place of the hay.

In other parts, children send their note in a helium balloon into the sky, explaining why they have been good or bad that year and listing the gifts they would like to receive if deemed worthy.

Nowadays, like Santa Claus in the States (or Father Christmas in Europe) – a recent importation to Mexico as some children receive presents from Santa Claus too – the Kings tend to leave their gifts under the Christmas tree.

Furthermore, for the Three King’s day, it is a tradition to eat pan dulce (‘sweet bread’) called Rosca de Reyes. The bread is decorated with piña (‘pineapple’) and higos (‘figs’) [for recipe click here].

El muñeco (‘a tiny plastic figure’) of baby Jesus is hidden inside the bread. The tradition of placing a trinket into the bread is ancient. The baby Jesus, when hidden in the bread, represents the flight of Jesus from King Herod’s evil plan to kill all the babies that could be the prophesied Messiah. The person, who gets the baby Jesus, is considered as the godparent of Jesus for that particular year! He or she must take the figurine to the nearest church on Día de la Candelaria (‘Candlemas Day’) (2 Feb). In Mexican culture, the person also has to organise a party and provide tamales and atole de leche or chocolate de leche (‘milk chocolate’) for the guests. 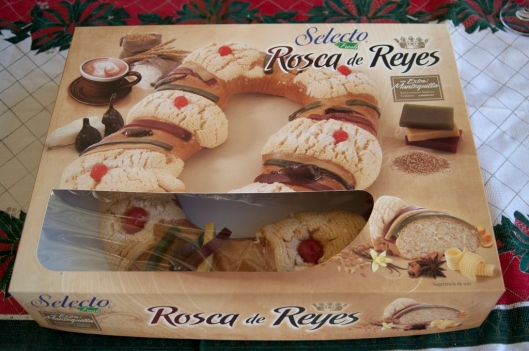 A commercially-made Rosca de Reyes out of the box, Oaxaca, Mexico / © Andreja Brulc

I found my home-made Rosca in one of the houses on the Calle de Porfirio Diáz in Oaxaca. I could not resist the lovely cinnamon and orange smell that came out of the house onto the street! 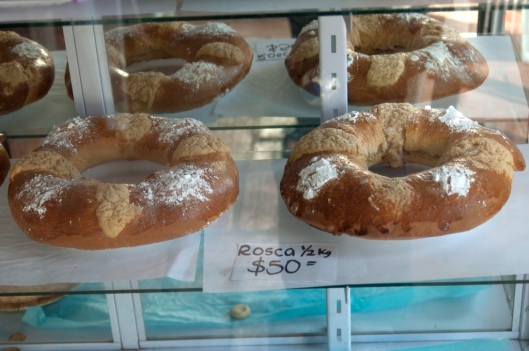 A home-made Rosca de Reyes in a glass display case by the entrance of a house on the Calle de Porfirio Diáz, Oaxaca, Mexico / © Andreja Brulc

I was especially amazed by the large Rosca women of the house had made for the party that was seemingly about to take place. The courtyard smelt absolutely delicious!

A large home-made Rosca de Reyes in the courtyard of a house on the Calle de Porfirio Diáz, Oaxaca, Mexico / © Andreja Brulc

Sharing a Rosca with your family, friends, neighbours or colleagues is really a fun and exciting way of socialising. Everyone ‘fears’ to cut a piece as it may contain el muñeco – except for the very young kids, who are more than happy to have a toy!

The child is sharing a Rosca de Reyes with his mum, Oaxaca, Mexico / © Andreja Brulc

I shared my Rosca with my Mexican friends. We all had a go after la comida – the main meal in Oaxaca that normally takes place around 3 pm. I was honoured to have the first go – I was lucky but only for a centimetre as the next piece contained ‘the thing’.

The child is surprised at finding a muñeco in his piece of the Rosca de Reyes, Oaxaca, Mexico / © Andreja Brulc

It turned out, as I was told, that a commercially made Rosca contains more figures that a traditionally home-made one. Also, the larger the Rosca, the more figures can be found. The one I bought had none, but it surely outdid the commercial one on its fragrance and flavour!

Of course, after a few muñecos were found in pieces, it was bound to be my next turn! And sure it was! I am still to stage a party for my friends in London!